Laura X aka Laura Rand Orthwein, Jr. is one of the world’s leading advocates pertaining to the women’s movement and a wide array of precursors and overlapping social movements from the second half of the 20th century.

Laura was instrumental in
forging women’s rights
as human rights 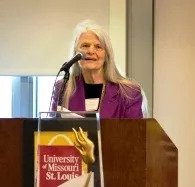 A native of St Louis, MO, Laura was educated at Vassar College, Washington University, Bank Street College of Education, the Universities of Vera Cruz and Puerto Rico (to become a pilot Headstart teacher in the Bronx and El Barrio, while being a CORE picket captain in Brooklyn, where she lived), NYU, Gerde’s Folk City, and received a B.A. in social science from the University of California at Berkeley. Laura was responsible for many other first-ever publications from the overall project, the Women’s History Library: The anthology Masculine/Feminine in 1969, with all the great manifestos; The Women’s Songbook; Female Artists Past and Present; Films by/and/or about Women Internationally, Past and Present; Bibliography on Rape; and Women and Religion Bibliography.

She took the name Laura X, on September 17, 1969, to symbolize her rejection of men’s legal ownership of women and the anonymity of women’s history, which was stolen from women and girls. She is a veteran of the anti-nuke, peace, civil rights, Free Speech, educational reform, anti-war, women’s, anti-anti-Semitism and anti-homophobia movements. She advocates for farm workers, Native Americans, ecology, disability rights, environmental health, and healthy home movements. In 1969, Laura reintroduced International Women’s Day into the U.S. and created and led the movement to create National Women’s Month, which recurs every year in March. She began collecting materials in 1964 and has been committed to this effort since then. Women and women’s health and legal issues are the primary focus of her work.

In 1978, Laura X founded and directed the research and campaigns of the National Clearinghouse on Marital and Date Rape after leading the successful campaign to criminalize marital rape in California in 1979, and she served as a consultant coordinator to campaigns that in 1993 successfully eradicated exemptions from prosecution for marital, date and cohabitation rape in the remaining 44 other states (there were 4 before California).

Laura X’s old website can still be found at: https://ncmdr.org

“There was a story about the cobbler, the slave who was a cobbler who sought his freedom by cobbling shoes. The story goes that there must’ve been a time when he knew how many shoes he must make to gather the money each month to then gather the totality of that treasury for his freedom. And then at some point he must’ve calculated how many nails…every swing of the hammer was toward his freedom. Well that’s what Laura has done for the last 62 years for human rights, mostly in women’s rights, and other social justice movements. Laura is the one who has been swinging the hammer for the freedom of humanity”

– Christopher Desloge, from his talk before the Founding Thought Leaders group,
Oct. 27, 2014